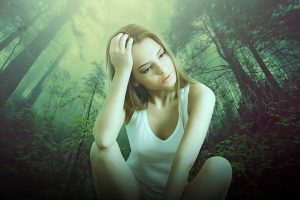 “When stigma is present, any individual belonging to a particular category, such as schizophrenia, is assumed to possess all of th enegative stereotypes associated with that category and is therfore feared, disliked, or avoided. (Mueser, K. and Gingerich, S. 2006, p. 431)

The effects of stigma are profound, ranging from people refusing to hire someone or rent an apartment to a person with mental illness to people just plain avoiding them out of misplaced fear. Neighbors fight against a proposal to open a group home or halfway house in their area, people call the police on peaceful, well-behaving strangers, and news reports frequently equate mental illness with crime. Schizophrenia has some of the worst stigma of all the mental illnesses. An additional issue is self-stigma, in which a person incorporates stigmatized beliefs that they then apply to themselves. Self-stigma can result in a person’s refusal “to acknowledge having schizophrenia because he feels that to accept the label would be tantamount to admitting he is crazy, worthless, or has nothing to contribute to society” (Mueser, K. and Gingerich, S. 2006, p. 432) or in feelings of hopelessness and grief and giving up on goals and resigning themselves to a lesser life than they could achieve.

The tragedies of stigma include the decrease in the quality of life of people with schizphrenia and the loss of some of the wonderful things people with schizophrenia can bring to the world. I personally have had clients who came in intially dejected, self-hating, and passive, thinking they were the lowest of the low and couldn’t’ do anything. Many of them have since started working, building friendships and hobbies, and bringing joy to their families with their kindness. As I mentioned in the previous blog post, the news and movies discard this type of story as one that won’t sell, one that’s not worth mentioning. However, I feel it’s the most important type of story worth mentioning regarding people with schizophrenia, as it gives them hope and gives the rest of us the knowledge that these people matter and bring a lot of good to the world.

In the next part of this series of blog posts, we’ll take a look at what you and your family and friends can do in the battle to fight stigma.

Ready to make an appointment?

If you are in the Twin Cities area and you'd like to make an appointment to meet with me in person, call 651-645-3115 or request an appointment.

Tips for Living with Schizophrenia

Get a copy of my free guide, "Tips for Living with Schizophrenia."

You don't have to have an appointment to get info about causes, treatment, or resources for schizophrenia.

Just send me an email with your questions, and I'll get back to you with some answers.